Several young men in Salalah, with the blessings of Oman Charitable Organization are collecting donations in Salalah today to support victims of the current famine in Somalia. They are accepting blankets, sheets, neat folded (clean) clothes, tinned long life food (example: baby milk) and money. In the spirit of Ramadhan, donate what you can and encourage others to do the same.
.According to the UN, more than six out of every 10,000 people are dying of hunger every day in some parts of the Bakool and Lower Shabelle regions of Somalia. While there have been numerous disasters in the Horn of Africa over the past decade, it is the first time a famine has been declared in the region since 1992, when hundreds of thousands of Somalis starved to death, prompting an international peacekeeping intervention. Nearly half the population requires food aid.

DONATIONS: will be accepted next to Aqeel Mosque in East Salalah starting today, July 31. Drive down Al Montazah Road going towards Dahariz. Once you reach the first batch of coconut stands in East Salalah, turn left and you'll see the mosque.
Posted by Nadia at 2:35 PM 4 comments:

41 years ago today a young man with a vision overthrew his father in a bloodless coup and turned this small primitive country into a modern state. happy birthday oman!
(on another note, does anyone know 'who' the prisoners released yesterday are? )
Posted by Nadia at 4:46 AM 2 comments: 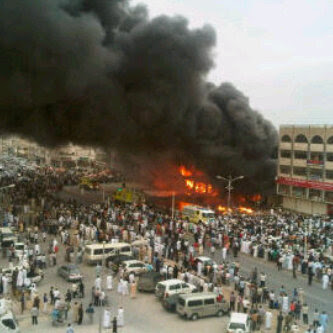 Hey guys.... as usual Dhofari Gucci was in the wrong place at the wrong time (i.e. at Baalbeck Lebanese Restaurant - on Salalah's main road, 23rd of July St.). Many of you may have heard that Al Ghubaish Enterprises, one of Salalah's oldest establishments is burning to the ground as we speak. The smoke can be seen from Saada and Raysut. Evidently fire fighters have not been able to put the fire out yet and it's spreading to other buildings. I hope it's under control now. If you hear of anything let me know. It took me 40 minutes to get out of the area because thousands of onlookers abandoned their cars and set off on foot to get a closer look at the fire. You can watch a video on YouTube here. Pray the fire wasn't deliberate and that no one was hurt.
Posted by Nadia at 8:35 PM 3 comments:

Hi everyone! I'm reposting this from Dhofar Eco Bug's blog since it's a great cause (and Dhofari Gucci is all for good causes!). If you're in Salalah, please make an effort to go.
. " "I am delighted to announce that ESO (Environment Society of Oman) are holding a meeting in Salalah for their Dhofar members. The meeting will take place on Monday 11th July from 5 - 7pm at the Port of Salalah Auditorium. I would strongly encourage all ESO members to attend and, if you're not already a member, why not come along anyway and join up that evening? Please confirm attendance by contacting Omar Al Riyami (ESO volunteering/membership manager) omar.riyami@eso.org.om
I think this represents a great opportunity for us to get involved and hopefully create an active local group. There is often a tendency for all activity to be based in and around Muscat. Let's turn up in large numbers and show that Dhofar is committed to the environmental cause!
Posted by Nadia at 5:29 PM 1 comment:

The remaining 8 Dhofar prisoners were released yesterday and came home today. My brothers went to greet them at the airport along with everyone else in Salalah! That marks the end of the Dhofar Protests chapter for the moment. You can watch the video here. Welcome home guys!
Posted by Nadia at 6:18 PM 1 comment: