Disturbing Propaganda in our Schools 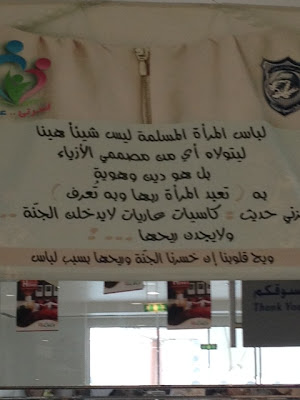 Recently, I walked into Lulu Hypermarket in Dhofar only to see this huge banner hanging between the two escalators. It goes something along the lines of:

"A Muslim woman's dress is not something to fool around with. It is not something for designers to play with. It is religion and it is identity. It is a woman's way to God. As the Prophet's (PBUH) said, the scantily dressed do not go to heaven and won't come anywhere near it".  How can we lose heaven over a piece of clothing?".

There were other posters as well. As a Muslim woman who covers from head to toe and whose abaya is baggy enough for an army, I found the posters extremely offensive. In fact, referring to these posters as 'Islamist propaganda' isn't far fetched. I refer here to 'Islamism', not 'Islam'. Islamism has several definitions but it can be defined as a set of ideologies holding that "Islam should guide social and political as well as personal life".

I had intended to blog about this earlier but decided against it. However, yesterday I was speaking to a concerned teacher at a local high school who claims this 'Covering-up-is-the-only-way-to-God' campaign (officially called "Be a Queen" campaign) has reached her school. The infiltration of the school system by these people (whoever they are - Salalah Men's Sports Club is one of the sponsors) telling young girls that following a certain dress code is the only way to God is DISTURBING. Surely parents/families are responsible for their own child's religious education and spiritual upbringing. The campaign has been endorsed by the Ministry of Education since it's being publicly discussed on their forum.

Their intentions are probably very good and they think they're paving their own way to heaven by promoting their campaign. However, instead of telling young girls to live in fear of hell and punishment and telling them they're 'wanted' by all men therefore they must cover up, and telling them dressing in BLACK (which is in NO WAY Islamic and only appeared in Dhofar in the 70s from the Iranian revolution and influence from Saudi Wahhabism)... instead of telling our girls to hide, be demure and not interact with the other half of humanity, what happened to raising strong girls who KNOW what's right? Girls who believe in being a good person? Girls who aren't shy to be out in society doing good? Girls who are proud of their religion and identity? Proactive girls? Why must it always be a fear factor? 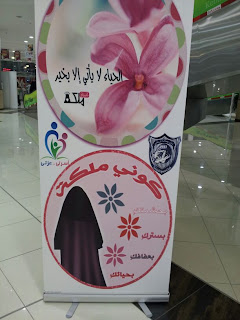 This form of control, brainwash, and this focus on shallow shallow shallow aspect of one's personal life in the name of religion has NO PLACE in my Islam. (By shallow I refer to all the petty discussions of whether dying one's hair is haram, and whether wearing colours are acceptable, and whether it's against God to pluck one's eyebrows or wear heels or go shopping for heaven's sake. In fact, I was told by a male cousin that I should cover my face when going to the mosque because someone 'saw me' getting out of my car and walking into the grand mosque in broad daylight and that as a Muslim woman I should be humble and demure!!!!!!!!). Why the obsession with women?

A 7.8 magnitude earthquake (8 according to Oman news) hit Iran this afternoon and tremors were felt in Oman (North of Oman in particular). Several buildings in Muscat were evacuated and there were rumors spreading of possible tsunami dangers. The Omantel headquarters in Mawaleh were evacuated completely at 2:45 p.m. The Government of Oman has issued a message to all citizens (as of five minutes ago) saying they were only tremors and there is no danger of tsunami waves. Nothing was felt in Dhofar ... knock on wood. The government confirms that life shall not be disrupted and if you think there's no school tomorrow, keep dreaming.
Posted by Nadia at 4:49 PM 2 comments:

Oman NEVER fails to baffle me. Real this article here by the one and only Sunil Vaidya over at Gulf News. Omani sorcerer caused the death of two people during one of his rituals in Muscat. I haven't heard of any 'death by black magic' incidents in Dhofar in recent years, but witchcraft is still quite popular down south where we are. In fact, just yesterday the house of someone I know had to be evacuated and 'cured' of any hex since several bundles of horrible things (animal bones, herbs, verses from the Quran written backwards, names of people, skin, etc) were found in the house. You can see from this piece by a local newspaper columnist that the use of black magic is still quite prevalent in Dhofar. Not a pleasant thought.
Posted by Nadia at 8:44 PM 1 comment:

Weekends for the WHOLE EFFING COUNTRY changed to Friday and Saturday as of May 1st. Major news.
Posted by Nadia at 3:28 PM 8 comments: