Well.... not as we know it anyway. Some may think I'm exaggerating and may even suggest I change the title of this post to "Haffa No More". But ... this is my blog after all and I've decided to name this post "Salalah No More". So there.

I'm having an emotional day, you see. I woke up to the news of the demise of the king of Saudi Arabia. Watching Saudi Arabia mourn created a tight knot the heart of every Omani as we all prayed for our own ruler's health. Trust me, it's not easy being in the dark as you can see from my previous post. After that, I was informed of the sad death of a friend's family member. Then I spent the morning in Haffa mourning Salalah as we know it. I'll say more about that in a bit. Following my heartbreaking morning in Haffa, I spent time cruising past Dahariz beach and Taqa beach, more areas that the government plans to revamp murder.  I decided to cheer myself up by seeing a movie. Unfortunately, the only movie showing at that time was American Sniper. I'm not a fan of war movies, but Bradley Cooper's kinda cute and I like Sienna Miller, so I went.

No words can describe how much I despise Hollywood right now. It's like America (no offense) is begging Arabs to hate them. What a racist stupid idiotic movie. Sure, show your movie in all Arab cinemas. Throw in a good-looking actor playing an American sniper, a few hundred F-words, and refer to Arabs more than a dozen time as 'savages' as you shoot them one by one from your comfortable mattress on the rooftop of an Iraqi home.  Many events in the movie took place in Al Falluja, an Iraqi city. "A city of savages" according to the US Marines. Yep. Not very nice for those of us who actually KNOW people from Falluja. Two of my math professors at university were from Falluja, and they were some of the nicest people I've ever met.

And then Americans wonder why the Arab world aren't fans. When people around the globe are struggling to strengthen understanding and build bridges to promote peace, out comes one stupid movie that ruins everything. I couldn't keep track of the number of people who got up and left in the middle of the movie. I consider myself to be a calm realistic and intelligent person, but I left feeling upset and well.... furious.  America, you failed.

Now, back to Haffa.

Anyone who has been to Haffa beach/corniche/souq knows what it means to us Dhofaris. In fact, the first post I ever wrote on this blog in 2009 was about Haffa. See the link here.  For decades and decades, Haffa beach is where locals go to practice the art of doing nothing. For as long as I can remember, Haffa has been the hub of local life. 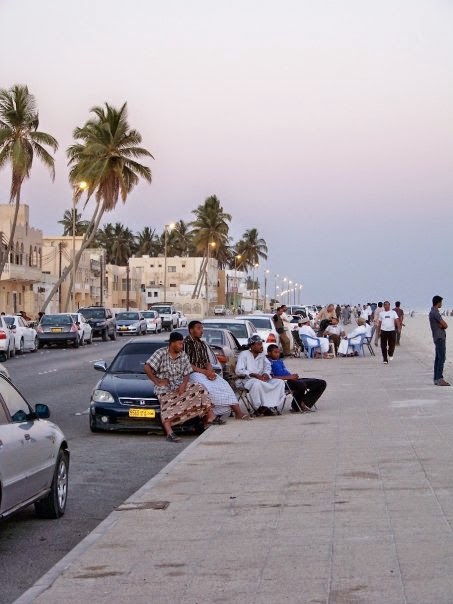 The picture above depicts Haffa as I know it.  Old men sitting in circles on the sand playing cards and board games. Young men playing soccer. Women huddled in groups sipping tea and talking. People on their front steps watching the world go by. Fishermen mending their nets. Guys smoking hookah. Kids build sandcastles. Tourists, locals, expats, everyone. All these people came to Haffa to chill. The entire length of the beach was dotted with ancient ancient precious coconut palms, old houses, cafes, a traditional souq, and at the other end Al Baleed archaeological site. Despite its ancient feel, people love the place. Local fishermen have lived on that beach for as long as they can remember. My friends and I sat on that beach every Friday evening for years. We'd gather to chat and sip tea. Haffa beach is part of us. It's in our hearts.

Anyway, one day many years ago (at least a decade?) the government decided 'Hey, let's kill Haffa and build a few hotels'. So yeah, families who have been living there for generations were given land and money and told to evacuate. They fought, they struggled, this was all kept out of the media (of course... like seriously, why would Oman wants to cover REAL issues in the media?). I know about this because a friend of mine and her family were evacuated.

It took years to get everyone out, and a few weeks ago they finally switched off water and electricity in Haffa. The houses were empty, vandals had stolen everything they could steal (windows, doors, metal, etc, etc). It looked like a war-zone (I have photos - to come soon).

A couple of weeks ago I drove over there in the morning. The silence was deafening. It felt like the aftermath of war. Crumbling ruins. Abandoned homes. Stray dogs. Vandals. A lump formed in my throat. How we took this beautiful part of town for granted assuming it would always be there. Now that it's gone, all I had were these crumbling ruins and my memories. There were other Dhofaris there that morning, all standing there like I was, heartbroken.

Last week they bulldozed everything down. Before they killed what was left, I decided to work on a very special project. I'll share it with you later, it needs a little editing.

In the meantime, this is what Haffa looks like today: 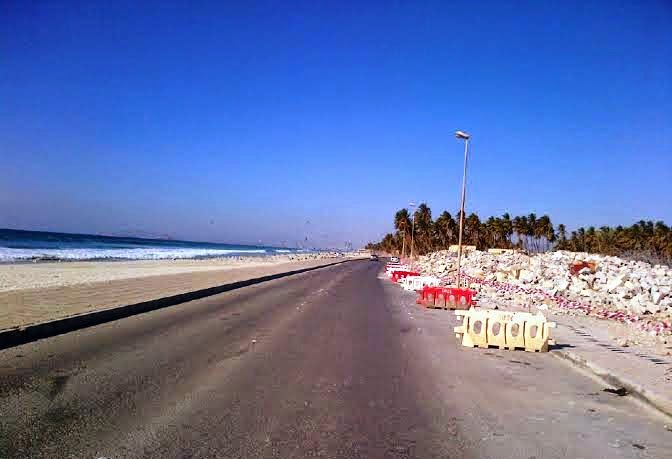 Now, don't get me wrong. I'm not against development. I even like the idea of having Costa on the beach. But did they really have to kill the heart of the city? For tourism? People come to Salalah looking for something authentic. Haffa was authentic. Seeing life for what it really is was authentic. Five-star hotels, cafes, and fancy walkways are anything but authentic. Do we really want to become another Dubai or Doha? We need to hold on to what makes us Dhofari. Our local life.

If you've been to Muttrah, imagine them tearing down all the waterfront buildings in Muttrah to make room for hotels and modern development. Imagine what the locals would feel. People come from all over the world to see Muttrah JUST AS IT IS.

The same applies to Haffa.

The worst part is that the government hasn't even bothered to share their plans with locals. We have no idea what they plan to do with the area. We hear through the grapevine... hotels, walkway, cafes, ... the usual.

Dahariz beach is also being revamped. I fear Taqah is next.