I can't believe it's been 40 years since His Majesty overthrew his father (in a bloodless coup) and turned Oman into a modern country. Look how far we've come! I will not join the thousands who will be marching down 23rd of July street today in celebration. I will sit in my favorite spot at the top of the mountains and say a prayer for His Majesty and this wonderful country. Happy Birthday Oman! 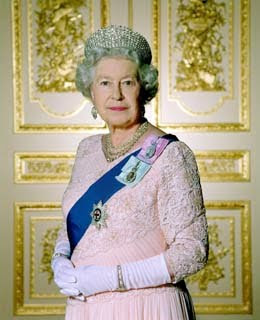 After THIRTY YEARS the Queen is finally coming to Oman to celebrate the 40th national day with us. What fun. I wonder whether she will be pulled through HOT Muscat in a carriage with His Majesty :)
Posted by Nadia at 2:29 AM 10 comments:

I am back from the dead and I apologize for leaving my loyal (and not so loyal) readers hanging for the past ten days. I'm afraid it's been slightly crazy at my end of town, with wedding preparations for this coming Thursday (shivers) and sadly ... a funeral. One of my elder relatives passed away. She wasn't old and wasn't sick. I believe she may have been in her early fifties (but it's hard to tell in Oman really). She was sitting in the mountains drinking tea with her family and then she fainted and that was it! Declared dead upon arrival by the doctors on duty at Sultan Qaboos Hospital's emergency room.
.
It was a great shock to the family and to everyone who knew her. Coming from a Muslim society that doesn't believe in autopsies, she was buried immediately after sunrise the next day and we will never know what killed her. I suppose in some ways it's good, but in others it means no closure, especially for her grieving children and husband.
.
In Dhofar, people tend to deal with death differently than other societies. We do not encourage breaking down or crying or depression. It's an event thagt the entire community gets involved in and you can be sure that if you've lost someone you love, you will never be left alone to grieve. Within hours the entire tribe knows about the death and it 's common that the close men (for men) and women (for women) wash the body of the deceased and wrap it in white cloth. Often the body is buried before the next prayer. So, if a person died at 2 p.m, they'll try to bury him/her before sunset. This is why it is of extreme importance to spread the word when a person has died so as many people as possible attend the funeral. Thank God for cell phones!
.
In my case, the woman passed away around 11 p.m so it was impossible to bury her by sunrise since nothing was open and it would be hard to find people, so they buried her at the noon prayers. Women don't go to the graveyard in Oman; not on the funeral day. Funerals last for three days in Salalah (some mountain tribes make it shorter) but the purpose of the three days is to read the entire Quran from cover to cover. On the final day, called the 'khatam' or the end, it marks the last chapter of the Quran and the end of the funeral. Life must go back to normal after that.
.
I went to the funeral for the entire three days. I wore my brightest thobe buthail (as it's taboo to wear black to a funeral here) and joined the hundreds of other women in the house of the deceased. I sat with her daughters and comforted them. I helped serve tea and fruit to women. It was all very peaceful and quiet except for the bloody funeral wailing.
.
I'm ashamed to say that some families here still practice funeral wailing when someone dies. A group of women (who hardly even know the deceased) will sit in the middle of the funeral gathering and wail like banshees for an hour or two then leave. It's an ancient pagan way of mourning and is anti-Islamic but these women aren't educated enough to know that. I personally found it very disturbing and so did the children of the woman who passed away, poor souls. Anyway, I don't have much time to write but I'm interested to know what funerals are like in your families (if you're from Salalah), your village/country/culture? How do you mourn the dead? What are your rituals? Do you feel it's taboo to discuss the dead person at their own funeral like they do here? TELL ME!
Posted by Nadia at 12:21 AM 13 comments: