Dhofari Gucci is trying to decide whether it's safe enough to publish my thoughts on the recent Public Prosecution attack on bloggers and online activists. I just feel uneasy about the whole thing. I've been reading others' thoughts with interest. some condemn the attacks. Others are just .... meh. Read this BS and this BS. The reaction in the Arabic blogosphere is rather mild. People are afraid. Fear is a bad thing. The End. Oh, and if you read Arabic, Majlis Al Dawla has condemned the prison sentence for journalists. and my favorite Arabic blogger and friend Mahfaif has some valid opinions over here. Sigh. It's been raining everyday now for the past four days. Monsoon is here, folks. The sun is gone. Come on over!
Posted by Nadia at 11:50 AM 4 comments: 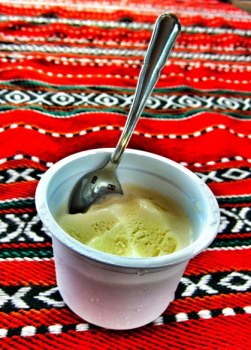 And.... Last year I blogged about  Trygve Harris who has become something of a celebrity here in Salalah and for good reason too! During the Khareef Festival 2011 she set up a kiosk in Al Haffa Souq and sold her infamous frankincense ice cream. She has been distilling frankincense in Salalah for the past five years or so for her essential oils and aromatics shop in New York City . She then started experimenting with ice cream and now she's become quite a sensation. She was featured in CN Traveler this week as well. (photo above from the CNT piece). So, ..... are you in Salalah this week? Are you interested in trying out her local Dhofari ice creams? If your answer is yes, read the following:

A Japanese TV film crew has been in Salalah for a month to film a documentary about frankincense. As part of the documentary, Trygve is hosting an ice cream tasting event that they'll be filming  in Al Haffa Souq on Monday June 18th (that's tomorrow) at 6:00 p.m . Frankincense ice cream will be available for everyone. You may be filmed and asked what you think of the ice cream. New flavors will be available as well including Chai Hakim, Darbat Jasmine, and Salalah milk banana. I have tried all four flavors and can tell you they're DIVINE. I highly recommend dropping by the Souq tomorrow at 6:00 p.m for some ice cream.

And no, I'm not her marketing agent. I'm just a fan who's obsessed with her ice cream. Do drop by tomorrow evening at 6:00 p.m at Haffa Souq! Should be fun (rumor has it that some members of the Japanese film crew speak fluent Arabic .... ) ... Keep your eyes peeled for a pair of pink grill shades :)
Posted by Nadia at 10:54 AM 4 comments:

April, May & June are the busiest months of the year for me, hence the blog-snooze. Anyway, here are some bits and pieces from the past few weeks that I found interesting:
.
1. According to one of my anonymous readers, Carrefour is set to open on July 15th here in Salalah at Salalah Grand Mall (it's actually called Salalah World, but I keep referring to it as the grand mall). The Carrefour part of the building looks almost done. The rest of the monstrosity will be done by next year I think? It's absolutely huge. I'll try to get some photos of the site next time I'm at Centrepoint (its tiny neighbor)
/
2. The weather in Salalah has been unbearably hot these past few weeks. It used to NEVER go up past 35 Celcius in Salalah in the hot months of the year. This week I've seen 39, but we haven't yet hit 40. It feels hotter though because the humidity is impossible. Usually this means we'll have a good monsoon. First official day of the monsoon (khareef) season is next Thursday June 21st. Last year the rains started at 10 a.m on June 21st, right on schedule. I hope this year is the same. I could do with a couple of months of rain! The ocean is already wild and most of Haffa Beach is gone already. Water is already up on the sidewalk and road. Monsoon is in the air!
.
3. Khareef Festival starts also on June 21st and will last for 28 days.
/
4. Phase One of Salalah Beach (another Muriya project - the other is Jebel Sifah) is done. Juwaira Hotel (a 5-star 65 room boutique hotel) is now open to the public. The marina is pretty and the restaurant is lovely. The official opening is in August but the hotel is fully functioning now. It's between Salalah and Taqah.
.
5. Our dear friend and passionate reader/commentator/national defender Mti reminded me that I hadn't published the new Public Prosecution announcement. Here goes:

MUSCAT: The Public Prosecution on Monday warned it will act against perpetrators of offensive writings or statements under the pretext of free expression that harm national interests and violates the sanctity of people's life. The statement said "Public Prosecution recently noticed the growing of offensive writings and inciting calls by some individuals under the pretext of free expression of opinion. This is a blatand violation of the sanctity of the personal life of individuals. It is also a libel against them either in their individual or job capacity. It has been noticed that rumors and provoking others to carry out negative acts that may eventually harm the homeland, individuals and national interests are growing".
.
"these statements or acts are contrary to our elite religious teachings, rich traditions and noble morals that are deeply integrated in the Omani society and contrary to the values on which its sons are being raised upon.
s
"They are also creating a reality that is against public law and order and morals. Morever, they are legally criminilized regardless of the audio, print, visual, telecommunications, and IT means used in this. These means include e-forums and social networking websites. Henceforth, the Public Prosecution advises all citizens and residents that is will take the necessary legal actions against all perpetrators of such staements or acts, as well as those who promote or provoke or assist them through any means " - Oman News Agency (June 2012)
.
Well, all I can say is .... meh. Live in fear, suckers!
.
6. Rumor has it that the Frankincense Lady is going to be selling her famous frankincense ice cream at Haffa Souq this khareef as well. I hope that's true. I've been craving it since July 2011.
.
7. I agree. I have about 80.
.
8. Paid Parking at Salalah airport was supposed to start on May 1st. Who was I kidding? still nothing...
.
9. Beware. A violent feminist post is brewing in my brain.
.
10. Finally, this video "Tell Us Your Story" (part of Ali Al Habsi's road safety campaign - he's our best goalkeeper) is really moving. If you don't recognize the faces, most of them are prominent Omani figures, celebrities, and businessmen. I recognized most of them. It's true, too many of us know someone who has lost their life in a car accident. Please watch and spread the word.
Posted by Nadia at 9:15 AM 4 comments: