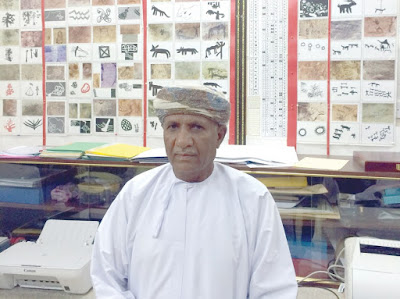 Very happy that this incredible researcher is getting some of the attention he deserves. I've been to his mini museum and have read a lot of his work. He's one of the people who was working on the Salalah-Mormon connection as well. Most (or all) of the cave writings research done in Dhofar is his as well.

This article was published in the Oman Observer two days ago:

By Kaushalendra Singh:  How a language would have travelled from Dhofar, south of Oman, to Colorado, a western US state or vice versa, is a complex question. The answer is also not simple, as experts from both sides have been researching to reach a conclusion and have done scores of papers, meetings and have collected samples to prove their points. But one thing is for sure that the scripts of an unknown language found both in Dhofar and Colorado are almost the same. And there has been similarity between climatic conditions of both the places. Like Dhofar, Colorado is known for its geographic diversity, with mountains and arid desert. Colorado, however, has snow-covered mountains and is perched a mile above the sea level. Experts from both the ends are trying to establish travel and other possible links to establish the history of a language and two cultures.

Ali Ahmed Ali Mahash Ash-Shahri, 68, has taken unto himself the task of establishing the fact that the language that has been found in Colorado was in fact the local language of the people living in Dhofar region some 2100 years ago. Ali humbly suggests adding or subtracting 200 years (+-200), as it has not yet been established and the language is yet to be deciphered. “Lots of evidences have been found, collected and documented but still not fully established,” he says and drops a hint that the language in question might be present day ‘Sahri’ which is known also as ‘Jabbali’ (Arabic word for something that belongs to mountain).

Ali Ahmed, however, strongly refutes the language being called ‘Jabbali’ “as mountains do not speak and languages are known by the people who speak them. The language was being used by local Dhofari Sahari tribe and hence it should honourably be called ‘Sahari’ language,” he insists and says “today there has been no written record of ‘Sahari’ language but it is spoken widely in Dhofar. He is trying to establish the missing link with the scripts that have been found in Dhofar and Colorado.

What makes more interesting is the fact that 28 years of research of this sexagenarian has led some researchers to understand that the remains of 33-alphabet language found in Colarado is very similar to the undeciphered inscriptions of Dhofar.

Ali Ahmed strongly believes that 28 years of meticulous research would lead him to get the written clue of the Shahri language. He is pained at disappearance of the written records of ‘Shahri’ language and says: “Each time a language disappears, a part of history and a way of thinking vanish. It is very important to establish written records of the language and we are lucky that its spoken form is widely practised in whole of the Dhofar region.”
The similarity between the alphabets found in Colorado and those of undeciphered inscriptions means a lot for Ali Ahmed. “It is a clear indication that the language is very old and the people from our place must have travelled to those places and finally settled there,” he says.

Tradition and culture is very close to Ali Ahmed. His studies in History as a subject in Beirut University and later his career in defence services made his passion for past more pronounced. He decided to do something for his own spoken language while collecting everything ‘old’ that came in his way.

His house in Saada speaks volumes of his hard work to give ‘Shahri’ a written identity. His living room has turned into a delicate house museum with all possible records in the forms of pictures, inscriptions, tools, photo negatives, audios and videos to support his research.

Besides all possible documents to support his research work, Ali Ahmed’s house museum has several items ranging from leather utility items to guns and gums.

He has written two books titled ‘Ancient inscriptions and drawings in Dhofar’ and ‘Language of Aad’. Both the books are written in Arabic and English.
Posted by Nadia at 12:32 PM No comments: