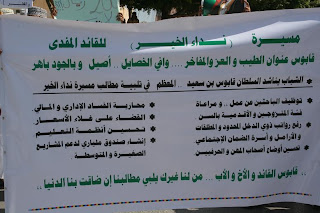 And I thought the opening of Oman's largest Lulu Hypermarket and the launch of the National Geographic exhibition would be the only interesting piece of news from Salalah today! Apparently not! 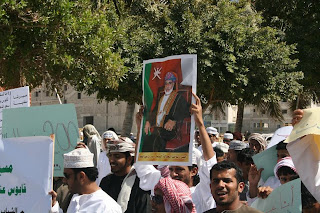 Protesters gathered outside the Governor's office yesterday after Friday prayers and evidently they have not moved and won't until their demands have been fulfilled. I sent my brother to investigate. They've been chanting 'People want an end to corruption!'.
الشعب يريد اسقاط الفساد
.
What demands? They want the following from His Majesty the Sultan:
.
(1) An end to corruption in the government
(2) More jobs for people in need
(3) increase in salaries for the poor, widows and divorced women
(4) Lowering prices
(5) An end to financial and administrative wasta in the government and private sector
(6) And other demands.
It'll be interesting to see how it turns out. The police are standing around watching. Nothing violent.
.
Here's a video of the demonstrations last night in Salalah. Evidently protests have erupted in Sur, Sohar, Shinas, and more in Muscat. What is going on in the Arab world?!!
.
Lulu post will come later!
Posted by Nadia at 12:20 PM