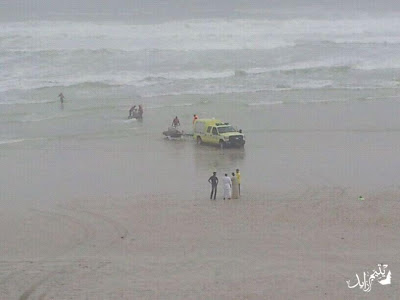 (attempts to rescue victims at Mughsayl yesterday)
This has been a bad couple of weeks. Five more people were killed in a car accident a couple of days ago in Dhofar, and yesterday two people drowned in Mughsayl while three others were rescued at the same location. One person (a UAE national) died at the hospital, and the missing body is also a UAE national. 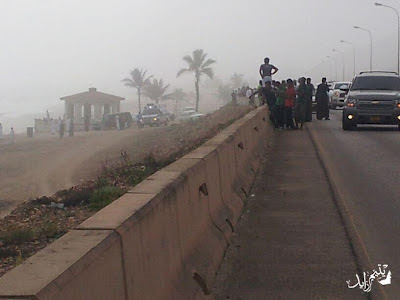 (tragedy watching - a hobby in this part of the world)
No offence to the dead, but seriously?! Swimming during monsoon?!!! There are signs everywhere on all beaches saying 'Swimming is dangerous from MAY to OCTOBER'. The undercurrents are just too dangerous. You've seen what the waves have done to the beach road in Salalah. You think they can't drag your body down as well? NEVER underestimate the strength of the ocean.
﻿
Posted by Nadia at 8:27 AM