What the hell happened to freedom of expression? 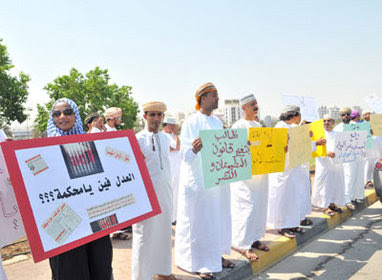 WTF, Ministry of Justice? What the hell. Shutting down an entire newspaper and sending an editor and journalist to jail for 5 months doesn't speak well for Oman's justice system or its reputation as a 'peace-making' nation. I can't say more than that. If they can shut down a newspaper for a pathetic little article, goodness knows what would happen to a humble little blog. It's as if our protests earlier this year never happened! Back to the same old crap.

Nearly 30 human rights activists held a demonstration before the Ministry of
Justice in Al Khuwayr on Sunday in protest against the court verdict in the
Azzaman newspaper case. The court had ordered closure of the newspaper and
sentenced its Editor in Chief and reporter to jail for five months for insulting
the Minister of Justice and his undersecretary.
“This is a complete violation of human rights. We are seeking freedom of expression and are protesting against misuse of power. We are also holding this demonstration to express our solidarity with the employee of the Ministry of Justice, Haroon Humaid al Muqaibli, who was also sentenced to five months in jail by the court,” said Habiba al Hinai, an activist.
“We want the government to understand our feelings as citizens. That is why we held this demonstration in front of the Ministry in Al Khuwayr,” added Said Sultan, another activist. “The media in Oman has been a silent spectator for years. Now, they have started reporting the actual events happening in the country. Jailing an editor and a reporter will send the wrong signal to the media community. ”
The appeal by the defendants will be heard in the Court of Appeal on October 15. Oman News Agency reported that an official source at the Public Prosecution said that the primary court judgment is not final and that the Court of Appeal has the authority to affirm or reverse the judgment in favour of the defendants. He added that the trial procedures have been according to the laws and legislations of Oman and in a way that secures the rights of all litigants.