Father of the Tail and Dish Detergent

Good Morning Everyone! It’s Saturday, the day I usually dread merely because my alarm clock goes off at 6. By 7 o’clock, I’m past the sulking stage and ready to tackle the day ahead.

How was my weekend? Ahh….. The Wedding.

So, you see, weddings in Salalah drive me crazy. On Wednesday I told you that one of my cousins was getting married. Each female who ‘attends’ the wedding is called a ‘Hadra’ (attender). Hadra means you gotta paint yourself white (we’re talking electric white here) then buy heavy oil paints and a thick paintbrush and start plastering your eyelids with Picasso-style colors. You then cover your eyebrows in wax and paint a new set of eyebrows two inches above your real ones. You also manage to double the size of your lips somehow. To top it all off, a blonde wig will do. (by the way, I’m serious). Finally, you put on your heavy black velvet thobe bodhail (Father of the Tail Dress) with heavy embroidery and tons of glitter, and 2 pounds of heavy jewelry. You end up looking like an uglier version of Marilyn Manson (and you thought HE was ugly? Come to Salalah!). 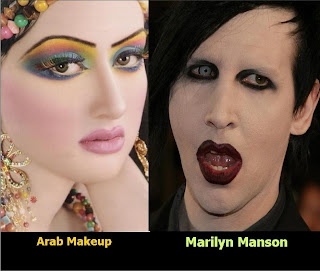 Do I sound like I’m sulking? Well, I am. I had to wake up at 5 a.m on Thursday, head to the ‘salon’ by 6:30, so a nosy woman could interrogate me about my life for FIVE HOURS while she turned my sister and I into Marilyn Mansons. We then rushed back to the house (yes, I was driving with all the makeup on. Don’t ask me about the stares), and while my sister was getting dressed, I plunked myself down in front of CNN to watch Obama’s speech to the Muslim world. I wasn’t going to miss it. Not for a wedding, that’s for sure. So, I sat in front of the TV for 54 glorious minutes before the wig lady arrived! Yes, we have a ‘wig’ lady who comes to pin on the blonde wigs. No, I did not wear a wig, but my sister did because she doesn’t have the patience to spend two more hours at the hair salon creating perfect curls and ringlets. I’ll get back to the speech later. Finally, we’re both ready to go. Checklist:

Ok, we’re set. Both of us hop into the car (my mother had been threatening to kill us if we were late). We stop by my uncle’s house to pick up two of my cousins. More Marilyn Mansons pile into my car. We get to the wedding (groom’s family’s house), and are immediately told to get up and start dancing Tabal (dig diggee dig diggee dig diggee …), so my sister and I did without cracking up. We sat down and another couple of girls got up to dance. This went on until 6 p.m when we were finally fed dry rice and dead cow (forgive me for phrasing it that way, but that’s how I feel about it). At midnight the bride was brought in to be stared at (after everyone was sick of staring at one another). They set her up on her marriage bed in her velvet thobe and makeup (worse than mine) and wig. Three hundred ladies went in to stare at her. She sat looking blankly at the wall without moving (tradition). Finally, everyone went home. End of wedding. The groom finally came in at 2 o’clock in the morning.

However, it wasn’t the end for us. The process of removing the makeup and hair and everything takes at least an hour and a half. The only way to remove Salalah makeup is dish detergent. Yes, dish s.o.a.p. You slather your face with dish soap then you get stainless steel or a thick sponge and a spoon and start scraping it off. The eyes take extra long because it hurts to scrap your eyes with a spoon. You end up looking like a tomato but your skin is clean. We finally collapsed into bed at 4:30 a.m. I spent all day Friday recovering.

Ok, back to Obama’s speech. I love it. I was close to tears several times but managed to control myself (because of the makeup). He spoke very well, and chose his quotes from the Qur’an, Bible, and Torah carefully. Perhaps a new chapter can be opened. I hate it when people say ‘Oh, he can talk all he wants, but will his words become actions?’ Negative thinking is NOT going to help. If we listen to his speech and believe that change can happen, then we’ve taken that step within ourselves and that is the purpose. He is one man. He cannot change the world, but we can. He can influence people, inspire them, encourage them, and motivate them to build a better world. His speech was inspiring and honest. He chose his quotes and examples carefully, and -remember guys-, he is a human. Humans aren’t perfect. He made a couple of mistakes here and there, but that’s no big deal. His message got through. I enjoyed the fact that he chose seven issues and discussed them one by one. He is such an amazing speaker. How he managed to speak so carefully without a paper for an hour totally baffles me. President Obama promised that he wanted his Cairo speech to be the start of an "honest" dialogue with the Muslim world. When it comes to how he handled the Israeli-Palestinian conflict, he fell short in a couple of points, and I’m sure the critics are busy attacking. However, no matter what he says, the Palestinians aren’t going to like it, and the Israelis won’t either because both sides don’t seem to want a two-state solution. Each side seems to think the other should be wiped off the face of earth. It’s not going to happen. It’s an unfortunate situation, but one has to deal with it positively and try to make the best out of it. Any solution is fine as long as the killing stops and people can have regular lives again. Children need school, families need homes, everyone needs healthcare, clean water, food, and peace! I’m ashamed of the World and of the Arab countries in particular that have done next to nothing to fix this. Ok, enough politics. Please watch the speech if you haven’t already:
http://www.youtube.com/watch?v=B_889oBKkNU
Let me know what you think!
Posted by Nadia at 11:18 AM