If you're going to San Francisco ... You're going to meet some gentle people there....
.
Hectic HECTIC times. Thanks for all the positive comments on my OmanForum post last week. Very much appreciated. I haven't had time to write because of a 'Work Overdose' as my fellow blogger Bader likes to call it. I've been taking work home everyday now for the past two weeks. I'm also trying to write something for the new bloggers' campaign, but I need to concentrate when I'm writing, so I'll probably do it at home (with a nice cup of tea). .
.
Anyway, I've been highly amused with a new gym I discovered in Salalah for women. Before I start explaining the reason behind my amusement, I'll explain a little about the women exercise situation in Dhofar. First of all, men are so damn lucky. They get to throw a pair of shorts and a t-shirt on and go jogging or swimming, and most of them play soccer on a daily basis in Salalah. Soccer is HUGE here. Some play badminton or tennis, and many just work-out in the gym. Easy.
.
What about women, though? We spend all day in our black robes, and hardly ever get out on our own, let alone find time to exercise (unless it's within the four walls of our houses). I mean, seriously, how motivating is it to walk on a treadmill for an hour alone? Beyond Boring. It's the easiest recipe for depression. Many women walk along the airport road, but that's also depressing because they're fully clothed (many in face veils) and we live in a tropical town, so ..... yeah.... hot. 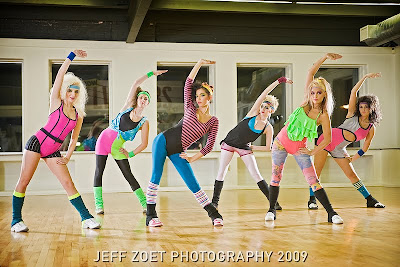 Anyway, Salalah Al Hamdulillah has several hidden female gyms. In secret neighborhoods and dark alley-ways you may spot a building that has a tiny sign saying 'Health Club'.... on the door there's usually another tiny sign saying 'NO MEN ALLOWED'. Some have signs that say 'No Males Invited'.. I think that's cute. I'm not going to implement the 'What happens in Vegas stays in Vegas' rule, and I'm actually going to explain to you what happens behind those closed doors. VERY amusing.
.
Alright, so after sunset many females head to their cars (or their husband/brother/driver's cars) and discreetly make their way to the secret destination. They're dressed from head to toe in black. The car drives into a dark alley-way and parks in front of a seedy looking building with a red-lit sign saying 'Health Club'. The females get out of the car. The first odd thing you notice is that they're carrying a backpack and a suspicious looking roll of something. A what? Yes, a yoga mat. The car drives a way, the women look left and right then slowly open the door and slide into the building. The door remains shut.
.
Once you shut that door, you're in another world. Men would kill to see what goes on in there. Big empty well-lit rooms. Mirrored walls. Women chillin' in tights and tank tops. Nike sneakers. Yoga mats. Puma shorts. Sweatbands. Che Guevara t-shirts (you heard me right). Ponytails. Bandanas. Loud Loud Music..... Hot stuff.
.
At 8 p.m the aerobics class instructor arrives; dressed in pink tights and a t-shirt with a long blonde ponytail and lime-green sneakers. Women/girls start warming up and playfully shoving each other around the aerobics rooms. All the lights come on. Everyone takes their place in front of the mirror. Music system is ready. Press the play button and get ready to hit the dance floor.
. 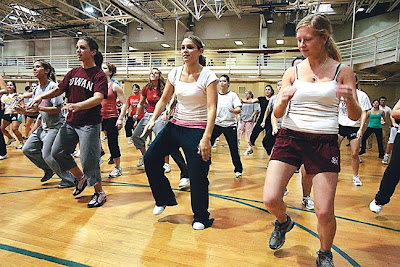 Global Deejays re-mix 'San Francisco Dreaming' blasts out of the speakers (listen to it. I need you to imagine with me). The instructor usually starts with warm-up exercises then gradually starts the heavy aerobics. Lots of hopping and jumping. Step-work. Mat-work. It goes on for an hour or more. Pain. Torture. But they love it anyway. Often the instructor will ask the girls if they're in for some hip-hop and break-dancing. Everyone will shout 'YEAH!' and out comes the hip-hop CD. She usually starts with The Black Eyed Peas 'Boom Boom Pow' and everyone will show off their dance moves. My favorite is Chris Brown & T-Pain's 'Greatness'. When the girls are feeling a little wild, the belly-dancing CD comes out. One of my expat friends who went there took one look at the place and said 'This is SO Ghetto!'.

The funniest part is that some instructors like doing aerobics to Salsa music. It actually works quite well with aerobics. Lots of hip and shoulder-shaking. The best is Marc Anthony's 'Mi Gente'. Dhofari girls pick up a lot of salsa moves from TV (So You Think You Can Dance/ Dancing with the Stars). After a couple of hours of fun and activity, one by one the women head to the cloak room (literally), change back into their abayas, tie up their hair, apply all the head-pieces until the hijab is complete, tie on the face-veil (burqa), change out of their sneakers, roll up their yoga mats and sneak out. The car is waiting outside (curious driver trying to get a peek as the door opens), woman gets in, and drives off into the night.